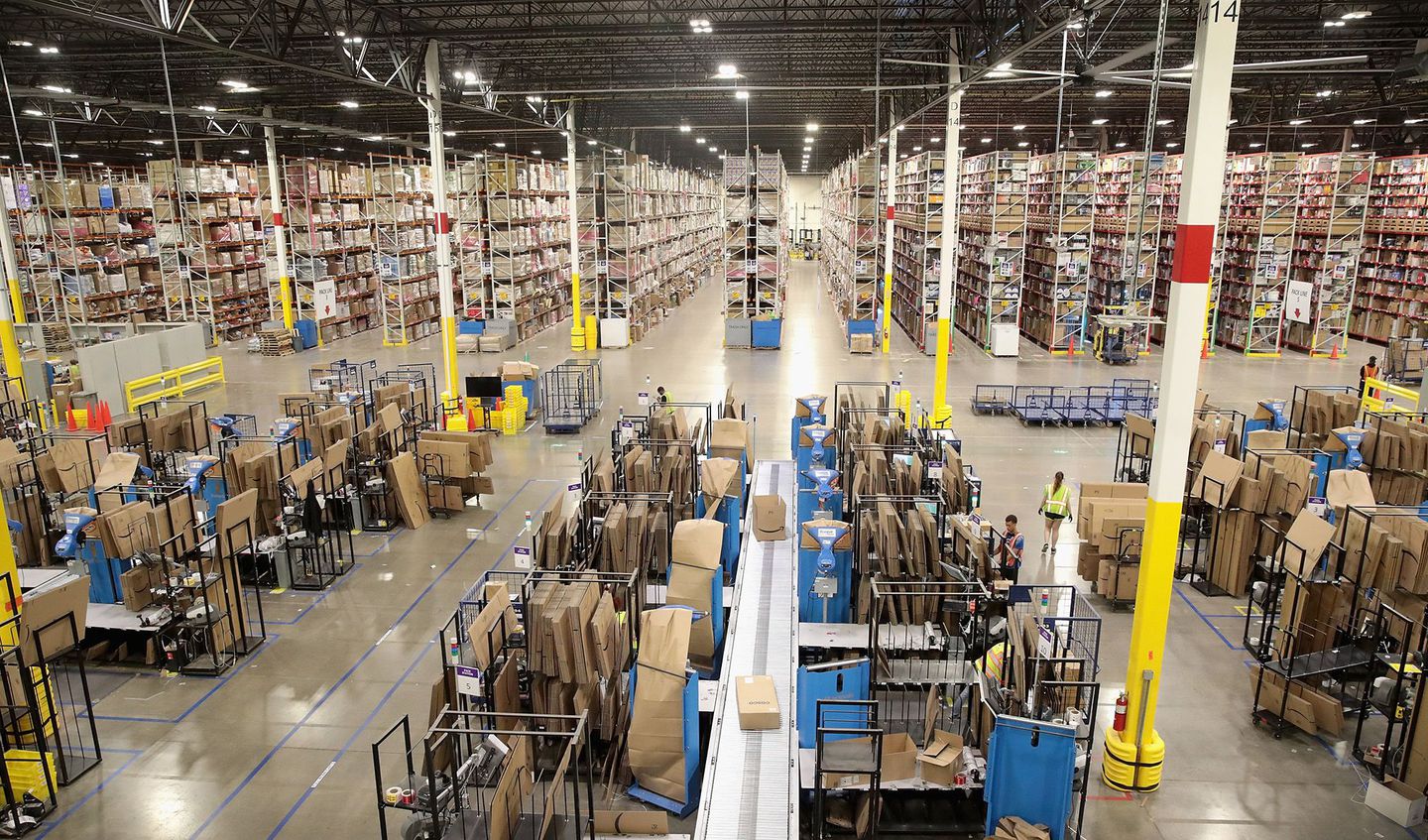 Most cargo ships putting into the port of Everett, Washington, brim with cement and lumber. So when the Olive Bay docked in early November, it was clear this was no ordinary shipment. Below decks was rolled steel bound for Vancouver, British Columbia, and piled on top were 181 containers emblazoned with the Amazon logo. Some were empty and immediately used to shuffle inventory between the company’s warehouses. The rest, according to customs data, were stuffed with laptop sleeves, fire pits, Radio Flyer wagons, Peppa Pig puppets, artificial Christmas trees and dozens of other items shipped in directly from China—products Amazon.com Inc. needs to keep shoppers happy during a holiday season when many retailers are scrambling to keep their shelves full.

By chartering the Olive Bay and dispatching it to a relatively sleepy port a few miles north of hometown Seattle, Amazon did an end-run around the shipping snarls that have stranded holiday inventory in Los Angeles and other ports. Besides Everett, the company has also docked at the Port of Houston. Such extreme measures have given Amazon executives confidence they’ll have adequate inventory to meet yet another record-breaking holiday shopping season, when Adobe projects U.S. consumers will spend $207 billion online, up 10% from last year. Many retailers have exhorted consumers to shop early to avoid disappointment. Amazon’s unflinching message: Bring it on!

In addition to chartering ships like the Olive Bay, Amazon hired 150,000 U.S. seasonal workers to help pick, pack and ship items, boosting pay and offering signing bonuses of up to $3,000. It’s dispatching half-full trucks to get packages to customers on time. The logistical effort’s projected $4 billion cost threatens to wipe out the company’s profit during its most important three months of the year. But for Amazon, which burnished its reputation serving as a lifeline during the Covid-19 outbreak, the holiday season is an opportunity to extend its advantage over rivals.

If the company succeeds in meeting its promises to customers this year, that will be thanks to Amazon-chartered ships taking products from factories in Asia, Amazon Air cargo jets crisscrossing the U.S., Amazon-branded vans departing from hundreds of local delivery depots and the hundreds of thousands of employees and contractors at each step along the way.

“There are structural advantages you have in redundancy if you’re Amazon,” says Jason Murray, a former Amazonian who led teams working on logistics software. “Amazon has its own transportation network, it has access to all the carriers. Multiple ships, multiple factories.”

This logistical prowess hasn’t been lost on the merchants who sell products on Amazon’s sprawling marketplace. For years, they resisted using the company’s global shipping service because doing so means sharing information about pricing and suppliers, data they fear the company could use to compete with them. But container shortages in the leadup to the holiday season persuaded many of them to overcome their qualms and entrust their cargos to the world’s largest online retailer. “Amazon had space on ships and I couldn’t say no to anyone,” says David Knopfler, whose Brooklyn-based Lights.com sells home décor and lighting fixtures. “If Kim Jong Un had a container, I might take it, too. I can’t be idealistic.”

Knopfler says Amazon’s prices were “phenomenal,” $4,000 to ship a container from China compared with the $12,000 demanded by other freight forwarders. Amazon also simplifies the process since it oversees the shipment from China to its U.S. warehouses. Other services have lots of intermediaries where cargo swaps hands, presenting opportunities for miscommunication and delays. “It’s a one-stop-shop from Asia to Amazon,” says Walter Gonzalez, CEO of Miami-based GOJA, which sells various products on Amazon including Magic Fiber cleaner for glasses. “It reduces the gray areas where the shipping process might fail.” Gonzalez says his company, which has been using Amazon’s global logistics service, has about 95% of the inventory it needs to meet holiday demand.

Other big retailers, including Walmart Inc., have also chartered freighters or sought to hitch a ride on ships loaded with iron ore, coal, grain or other commodities, freight consultants say. But Amazon has been preparing for this moment since the mid-2010s, when it started booking space on cargo ships to provide a more seamless link between Chinese factories and its warehouses. “They basically went from zero containers a month a few years ago, to over 10,000 containers a month,” says Steve Ferreira, an ocean freight consultant. “The thing is an 800-pound gorilla now.”

Last year, the company added chartered aircraft to the mix. Most air freight is carried in the bellies of passenger jets, but when Covid-19 restricted travel, Amazon moved quickly to replace the lost space with cargo planes. This effort complements Amazon Air, the company’s fleet of 85 planes that move inventory between 40 airports in the U.S. and has expanded to Germany.

Bernie Thompson, CEO of Plugable Technologies, used Amazon’s air service to ship laptop docking stations and other electronics from China to the U.S. to bypass clogged ports. Before the pandemic upended supply chains, flying inventory by air cost 10 times more than sending it by ship. Now, thanks to a spike in the cost of moving goods by sea, shipping by plane costs only four times as much—a premium Thompson was willing to pay. “As long as we don’t have stuff stranded on boats,” he says, “it’s worth it.”

By the looks of it, Amazon has solved the trans-Pacific shipping challenge. Getting merchandise from warehouses to customers’ homes could pose an equally tricky challenge amid one of the worst U.S. labor shortages in half a century. The web and airways are blanketed with ads for jobs in the company’s warehouses, touting $15 an hour to start and health benefits on the first day. Amazon employees in online chat rooms say they can earn more than their supervisors thanks to plentiful overtime shifts, while others fear burning out beneath crushing demand. Even those who dislike the work are compelled to stay through the holidays to qualify for bonuses.

The mom-and-pop delivery contractors that now handle most of Amazon’s U.S. deliveries are also struggling to hire and retain drivers who, faced with the company’s demanding requirements, have been known to abandon their vehicles mid-shift and quit. If the delivery firms can’t keep up, Amazon can turn to its Flex network of drivers, who ferry packages in their own vehicles. Flex drivers have been boasting of earning $40 to $50 an hour, up from the usual rate of about $18. It’s a sign Amazon is willing to pay whatever it takes to reduce strains on its delivery operation.

“Amazon will stick to its guns and get things to customers,” says David Glick, a former Amazon logistics executive who is now chief technology officer at Seattle logistics startup Flexe. “It’s going to be expensive but, in the long term, builds customer trust.”