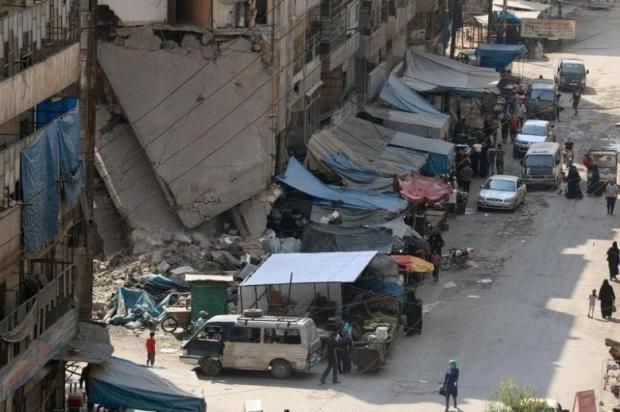 Economic costs of Middle East wars exceptionally high: IMF study
(Reuters) –17/09/2016
Armed conflicts in the Middle East and North Africa are not only devastating the economies gripped by fighting, but are sapping growth in neighboring countries and those hosting millions of refugees, the International Monetary Fund said on Friday.
In a new study analyzing 179 conflict countries since 1970 to quantify economic costs, the IMF found that the drops in economic output in war-torn Syria, Libya and Yemen in recent years have far exceeded the worldwide average.
After five years of war, Syria’s gross domestic product is less than half its pre-conflict level in 2010, while Yemen lost 25 percent to 35 percent of its GDP in 2015 alone. Oil-dependent Libya saw its GDP fall 24 percent in 2014, the IMF said.
After three years of conflict, Middle Eastern and North African countries wracked by fighting suffered average GDP losses of 6-15 percentage points, compared to a 4-9 percentage-point average worldwide, according to the study.
Countries bordering a high-intensity conflict zone suffered an average annual GDP decline of 1.4 percentage points worldwide, with a bigger drop of 1.9 percentage points in the Middle East and North Africa region.
The migration of more than half of Syria’s population – 6.6 million internally and more than 5 million to other countries – has magnified the economic losses, dramatically escalating poverty, unemployment and school dropouts in countries that were already struggling, the IMF said.
Many of the refugees are skilled workers, leaving the countries in conflict with a significant brain drain.
In contrast to Europe, where the influx of refugees from Syria and Yemen has only had a small economic impact and some positive effects, the migration has had a much more detrimental effect in Middle East and North African host countries, according to the study.
In Lebanon, migrants competing for informal employment have pushed down wages across the economy, pressuring already-stretched public services, including health care and education.
Physical infrastructure damage, now estimated at $137.8 billion in Syria and more than $20 billion in Yemen, represents a long-term challenge for policy makers and has reduced trade and output in neighboring countries, according to the study.
The IMF study urged policymakers to prioritize fiscal spending to protect human life and serve basic public needs.
It said the top priority for the IMF and other external partners was to scale-up humanitarian aid in conflict zones and neighboring countries hosting refugees, using grants and concessional loans as much as possible.
The study emphasized the importance for conflict-torn countries and their neighbors to maintain well-functioning institutions, especially central banks. These, in turn, should use monetary and exchange rate policies to shore up confidence in their economies.