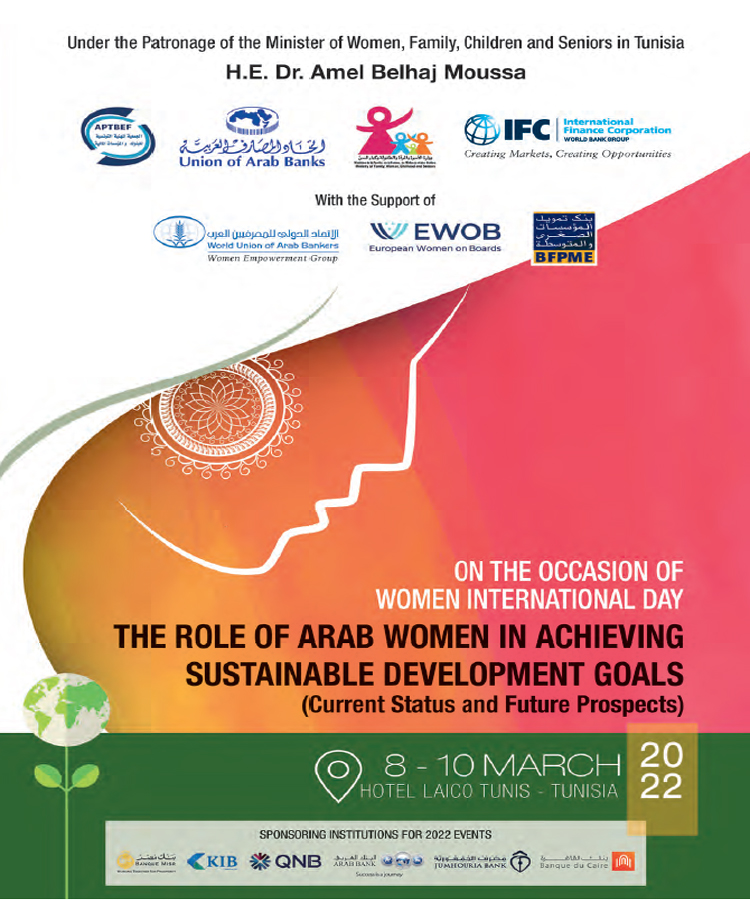 Nonetheless, despite numerous accomplishments and tangible progress toward gender equality, this progress has recently slowed. Women currently hold only 5% of all CEO positions in developed countries, and the same percentage holds other high-level positions as well, resulting in a massive pay disparity. The International Labour Organization (ILO) has estimated that decreasing the gender gap by 25 percent will boost global GDP by $5.8 trillion by 2025, (ILO, 2019).

The Arab countries are at the bottom of the global gender gap, with women in the majority of these countries facing insurmountable barriers, discrimination, legal and regulatory obstacles, a lack of economic opportunities, difficult working conditions, and a lack of institutional and societal support required to benefit from their energies in economic and public life. Women own 10.9 percent of all small and medium-sized businesses in Tunisia, the highest percentage among Arab countries. This percentage gradually declines in other Arab countries, reaching 8.5% in Jordan, 8% in Iraq, 7.9% in Lebanon, 7.8% in Palestine, 6.2% in Mauritania, 6.1% in Egypt, 4.9% in Morocco, 4.6% in Yemen, and 4.5% in Sudan. In most Arab countries, the percentages of micro-enterprises are also lower. These figures demonstrate the limited economic participation of Arab women.

As UN officials have repeatedly stated since the adoption of the 2030 Agenda for Sustainable Development, there can be no social development without full gender equality and the abolition of all forms of discrimination, and there can be no environmental sustainability without women playing an active role as change agents.

In this regard, it should be noted that the Union of Arab Banks has sought, for years, to empower and build women’s capacities through its forums and conferences held in this field in various Arab countries, with the aim of raising awareness about the importance of including women in economic activities, and overcoming the difficulties in front of their participation in all The fields, to be an active and pioneering element in sustainable development, in accordance  with the 2030 Agenda for Sustainable Development and the 17 Sustainable Development Goals and in particular with Goal 5  of the Sustainable Development Goals, which calls for “giving women equal rights to economic resources, as well as to accessing Ownership and control over land and other forms of property, financial services, inheritance and natural resources, in accordance with national laws” and Goal 8 “to promote sustained, inclusive and sustainable economic growth, full and productive employment, and decent work for all.”

As a result, the Union of Arab Banks, in cooperation with the Tunisian Professional Association of Banks and Financial Institutions, is organizing a conference titled: “The Role of Arab Women in Achieving Sustainable Development Goals: (Current Status and Future Prospects)”

The three-day conference aims to build bridges to economically and socially empower Arab women, establish social justice values, strengthen their role in achieving sustainable development goals, identify female entrepreneurs who support the implementation of sustainable development goals, and exchange best practices and creative ideas. It will also serve as a platform for exchanging experiences and increasing women’s participation in economic and civil life in the Arab region, with representatives from the private sector, financial and banking institutions, regional and international organizations, and civil society invited to participate.

This conference will be accompanied by an “exhibition of handicrafts and traditional handicrafts for Arab women,” in which most Arab countries will be represented.

Main topics of the conference:

SDG 5 ” An Accelerator of Change.”

Women entrepreneurs at the heart of   Post-Pandemic recovery.

“Impact Traceability of Women Empowerment Initiatives in the field of TIC“