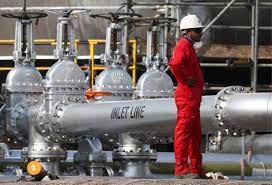 Saudi Arabia posted a budget surplus of 57.49 billion riyal ($15.33 billion) in the first three months of 2022, the finance ministry said, bolstered by a 58 percent jump in oil revenue as prices surged.

The world’s biggest crude exporter posted oil revenues of 183.7 billion riyal in the first quarter, up from 116.6 billion riyals the same period in 2021, the data showed.

Brent crude prices ended the first quarter up almost 70 percent to $107.91 a barrel from end of March 2021, as the Russian invasion of Ukraine exacerbated concerns over petroleum supplies.

Despite the boost from oil revenue, Saudi Arabian state spending remained modest, up 4 percent from a year earlier to 220.47 billion riyals in the first quarter.

“Saudi spending remains cautious on a year-on-year basis despite marked increase in oil revenue, but we do expect greater support to the economy through the PIF,” said Monica Malik, chief economist at Abu Dhabi Commercial Bank, referring to the kingdom’s sovereign wealth fund.

The kingdom increasingly relied on the PIF, with assets of more than $600 billion, and other state entities to drive an ambitious spending push.

The kingdom’s total revenues stood at 277.9 billion riyal in the first quarter, up 36 percent year-on-year, with non-oil revenue up 7 percent to 94.26 billion riyals in the quarter.