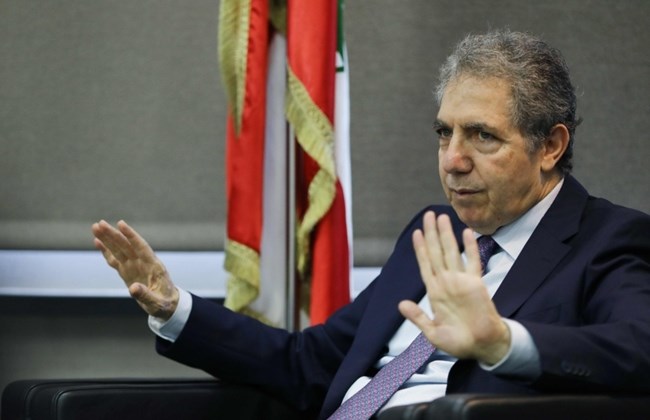 Central Bank Gov. Riad Salameh has to comply with the Parliament’s decision to provide all the state and BDL accounts to the forensic auditing team because these accounts do not fall under the banking secrecy law, Caretaker Finance Minister Ghazi Wazni said Sunday.

“The lawyers syndicate and several legal consultants assured that the banking secrecy does not apply to the accounts of the state and BDL. Banking secrecy only applies to the private sector accounts,” Wazni told The Daily Star.

Parliament passed a recommendation for a forensic audit Friday to be carried out not just for the Central Bank, but for all state institutions.

Berri had called for the session after President Michel Aoun sent a letter to Parliament stressing the importance of the forensic audit to prevent Lebanon from being viewed as a “rogue or failed” country by the international community.

But Parliament did not pass a law to amend the banking secrecy which may trigger some legal debate on whether Salameh has the right to reject the request of the forensic auditing team.

“All transactions and operations of the state and BDL must be accessed by the forensic auditing team. But if Salameh refused to hand over these accounts then it’s up to Parliament to take the next step,” Wazni explained.

He added that the Cabinet will meet in the next 48 hours to see if Alvarez & Marsal company is interested in conducting forensic auditing of BDL’s accounts after its withdrawal.

“If Alvarez refused to work with us then we will look for another company to complete the work,” the minister said.

Restructuring consultancy Alvarez & Marsal (A&M) confirmed Thursday it had withdrawn from a forensic audit of Lebanon’s Central Bank as it had not received the information required to carry out the task.

Responding to a question, Wazni said the Lebanese authorities are not contemplating the removal of Salameh if he refused to cooperate with the forensic auditing team.

“We are not considering the removal of Salameh because it’s not realistic,” he added.

But legal consultant, founder and manager of JUSTICIA Paul Morcos said the Parliament’s decision or recommendation remains vague as it fell short of passing a law to amend the banking secrecy and money and credit law.

“The Parliament’s decision is out of place. Instead of amending the banking secrecy law it instead made a recommendation and this is not sufficient to enable the forensic team obtain all the information from BDL,” Morcos told The Daily Star.

He added that all what was needed from Parliament is to change one and a half line in law 151 so the forensic team can perform its duties without any hindrance.

“Parliament could have voted to amend the 1956 banking secrecy law as it voted to consider the victims and the family of the victims of Beirut blast as martyrs as in the case of the Lebanese Army and place all the wounded of the blast under the National Social Security Fund. Why didn’t they vote on amending the banking secrecy law to end this debate?” Morcos asked.

Morcos said that he looked at the contract between the state and Alvarez & Marsal before signing it.

“I warned the drafters of the contract that BDL will justify its refusal to cooperate with Alvarez & Marsal that the information violates banking secrecy. But they did not take my remarks into consideration although they accepted other remarks I made,” he added.

Morcos stressed that the contract should have been more specific to facilitate the work of the company.

The legal expert did not support annulment of the banking secrecy in Lebanon.

“We should keep this law to attract funds and deposits in the future and once the banking sector stand on its feet,” Morcos said.

The Central Bank has declined to comment on the A&M withdrawal. It previously said it provided its own accounts for the audit and the government should submit state accounts to “spare the Central Bank from violating legally binding bank secrecy laws.”

The audit is also a main demand of the International Monetary Fund, whose talks with the caretaker government stalled over inaction on reforms to tackle endemic corruption and waste.