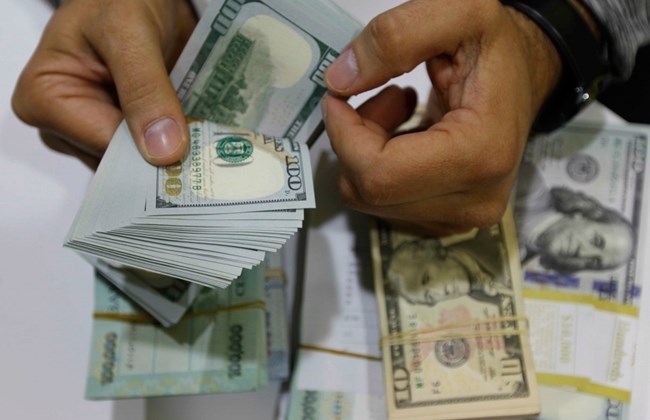 The Central Bank can reduce the dollar exchange rate to the Lebanese pound if it supplies merchants and suppliers with up to $2 billion to buy basic commodities for the country, a banker said Wednesday.

“I don’t see a point in providing the licensed currency exchange traders with dollar banknotes from BDL so they can supply Lebanese suppliers with cash to buy basic items for the markets. The banks can handle the importers if BDL injects between $1 billion to $2 billion from its gross foreign currency reserves,” the banker told The Daily Star on condition of anonymity.

BDL has been injecting around $3.5 million a day on average to the licensed money changers to exchange them for Lebanese pounds at an average rate of LL3,850.

But this small cash injection to the traders was not sufficient to discourage frustrated citizens and merchants to buy dollar banknotes from the black-market at outrageous rates.

The pound Wednesday plummeted to a new low, crossing the LL9,000 mark against the dollar on the black market.

The Central Bank set the buy and sell rates for the dollar on the Sayrafa electronic platform at LL3,850 and LL3,900 respectively.

Meanwhile the dollar was trading at around LL9,100 on the black market, further depreciating the value of the Lebanese pound and effectively decreasing the already little purchasing power people have left.

The banker said the licensed traders are not qualified to deal with Lebanese citizens who want to buy dollars.

“Some of these exchange dealers humiliate the people who are lining up to buy dollars. They are making matters worse. Banks can help finance the basic imports at lower pound rates if BDL supplies them with foreign currency. If banks receive sufficient dollar banknotes the rate can drop to LL3,500. The dollar rate should not be more than LL3,500 to begin with,” he explained.

He admitted that some Syrian citizens are willing to buy dollars from Lebanon at LL20,000 at least because the situation in Syria is catastrophic.

The banker said the Lebanese who withdrew billions of dollars six and seven months ago are not too keen to deposit the money back in the banks.

“It is a question of confidence. If there are no measures to restore confidence then the citizens will continue to buy dollars at very high rates,” he added.

Marwan Barakat, the head of economic research at Bank Audi, told The Daily Star that the reasons fot the depreciation of the local currency relative to the US dollar on the parallel market are numerous.

“First, it revolves around the increased political uncertainties leading to a gradual loss of the confidence factor. Then rises the significant money creation in Lebanese pound with currency in circulation almost doubling since the beginning of the year amid large fiscal deficits with direct monetization on behalf of the Central Bank. Another reason is the local shortage of US dollars amid declining inflows and consecutive balance of payment deficits. It is also worth mentioning the noticeable smuggling through illegal border routes which also weighs on the currency’s market,” Barakat said.

He added that “while the effects of any immediate measure to curtail currency depreciation would remain of a temporary nature, a containment of the monetary drift looking forward is conditional upon a positive confidence shock related to political and economic management which in in turn hinges upon the launching of signs of a parallel containment of Lebanon’s twin deficits, namely its foreign and fiscal deficits and corollary the state borrowing requirements.”

For his part, Louis Hobeika, professor of economics and finance at NDU, said the labor minister needed to get her act together and coordinate with recruiting agencies in Lebanon to find jobs, adding that the Lebanese need to fill the vacancies left by the foreign workers who left the country for good.

He added that what Lebanon was witnessing was a monetary failure.

“Poor financial management remained in parallel with the bad administrative and political situations. This was matched by the coronavirus, which severely hit the Lebanese economy.

Hobeika saw no reason for the insane surge of the dollar against the Lebanese pound.

“The Lebanese should think in a rational manner. The dollar rates on the black market makes no sense,” he added.