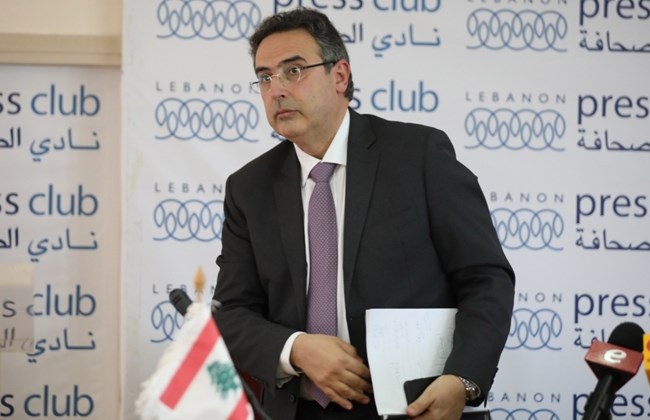 The director-general of the Finance Ministry Alain Bifani said Monday the procrastination of the authorities to implement reforms and the smear campaign against him have prompted him to resign.

Bifani, who was one of the top Lebanese government negotiators with the International Monetary Fund and one of the drafters of the Cabinet’s economic reform plan, made it clear in his news conference that his resignation should be taken as an alarm bell for officials to take matters seriously.

United Nations Special Coordinator for Lebanon Jan Kubis expressed his regret for the resignation of Bifani, adding that it is a loss for Lebanon.

He added that Bifani’s resignation came at a critical time for Lebanon as the country is currently engaged in direct negotiations with the IMF.

The former official at the Finance Ministry came under harsh verbal attacks from many banking circles as well as politicians who did not approve the government’s approach in tackling the financial crisis with the IMF.

Some of these circles tried to dispute the losses mentioned in the government’s economic plan but IMF officials repeatedly said that the figures reported by the Lebanese authorities were close to their numbers.

They even tried to give the impression that the government’s economic plan would seize all the deposits of the Lebanese and non-Lebanese.

But Bifani assured that the government had no intention to touch the bulk of the deposits.

“The approach adopted by the government plan was unanimously approved and received a welcome from the financial institutions for the Lebanese seriousness in approaching matters,” Bifani explained.

“It appears that the system used various methods to strike the government plan, and they tried to portray us as corrupt, but the judiciary will have the final say on these cheap accusations,” Bifani said.

He added that the Executive Authority has neither interpreted the content of the plan that he submitted, nor the preciseness at all of the allegations that claimed the plan aimed to reduce the depositors’ money.

“The state of denial, procrastination, and treasonous campaigns and nonimplementation all hit the path of reforms, and today we have come to present issues that satisfy those who benefit from the existing system in a way that would make Lebanon lose its ability to negotiate with international parties.”

Bifani said the executive branch has neither interpreted the content of the paper that he submitted nor responded to the allegations that the plan wanted to reduce the depositors ’money.

He underlined the importance of “listening to the voice and frankness of the people, and this time the opportunity was real after it became clear that it is not possible to obtain financing for free without a major reform process,” noting that the IMF has endorsed the government’s figures and approach.

He added: “The value of the deposits that came out of the banks is $17.3 billion,” noting that the net distributed losses are about $61 billion.

Bifani said that according to the government’s plan, the state intended to repatriate $10 billion that were transferred abroad and contrary to the regulations.

The plan also aimed at repatriating $20 billion from the unjustifiable interest rates that were paid to big depositors and bankers.

Bifani pointed out that there were attempts to jeopardize the talks between the government and the IMF.

He pointed out “the Lebanese are subjected to haircuts as a result of not implementing the government plan and not the other way around,” stressing that “the person responsible for people’s deposits is the bank.”

“I chose to resign because I refuse to be a partner or witness to the collapse, and patience no longer works today.”

He added: “Everyone is required to have a clear position and I took it after I exhausted every effort to save what could be saved.”