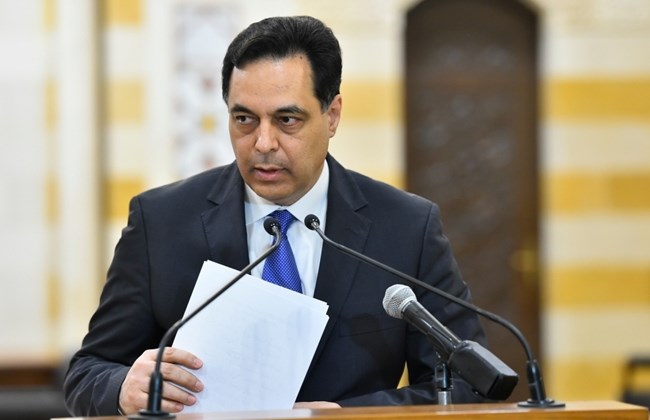 Caretaker Prime Minister Hassan Diab revealed Monday that the cost for the subsidy card for Lebanese families would be $1.2 billion annually, stressing that it was up to the Parliament to find source of funding for the card.

“There is a clear reason why I went to Qatar and that is to ask our Qatari brothers for help in the cost of the ration card. Their response was positive but I do understand that they have to study our request first before making a final decision. The annual cost of the ration card would be around $1.2 billion,” Diab told The Daily Star in an exclusive interview.

He noted that Lebanon has been spending up to $7 billion a year on subsidies, including a total of $5 billion spent on subsidizing goods that benefit Lebanese families, noting that what the government was looking at was to lower that number to $1.2 billion for subsidies.

He indicated that the caretaker Cabinet would be presenting the draft law soon, hoping that the Parliament passes it as soon as possible because the country could not sustain such massive spending on subsidies which is depleting reserves.

“We are yet to set the financial limitations [floor and ceiling] for the ration card, but given the fact that the median/average low income is around LL705,000 per capita, then the average income of an average family of around 4 persons is around LBP 3 million, give or take, and the ration card’s ceiling would not exceed that,” Diab said.

He noted that the fiscal value varies based on the income and assets of each of the 700,000 to 750,000 families in need who represent around 75 percent of the Lebanese population, and who according to government studies have become in need due to the dire situation in the country.

“When it comes to the source of funding, it is not up to the government to find the funding for this ration card but rather to the Parliament and the Central Bank (BDL),” Diab added.

Responding to one question, the caretaker premier said there had been talk that he would be depleting BDL’s reserves to fund this card, and reminded that back in 2002 BDL reserves went as low as $1 billion and no one, not even Central Bank governor Riad Salameh, said anything as others are saying today.

“On the other hand, I am against the option of printing money to fund the ration card because printing more money will not only strain our national currency’s exchange rate, but also lead to hyperinflation.”

As for the draft law, Diab said if it was approved, it would help cut government spending on subsidies significantly.

“As I have mentioned, Lebanon would be cutting our spending on goods by $3.8 billion. Moreover, the money that Lebanon was depleting on subsidies and imports will be put back in the economy inside the country via the ration card as nearly 3 million Lebanese will be benefiting from it to buy goods and other material from the internal market,” Diab said.

Asked whether the Central Bank would no longer touch the remaining foreign currency reserves if it printed only pounds to finance the program, Diab simple responded that BDL sould be asked for an answer as the Cabinet’s work was to envisage the best scenario for a ration card and it left the source of funding to the Parliament and BDL.

Diab repeated that the caretaker Cabinet now had limited power.

“There is no magic wand to wave around and get out of these financial, economic, political and health crises that we are facing. As a caretaker government we have no power to implement any major reforms or take new decisions. We are bound by the Constitution to take care of minimal administrative work but we are doing it at the highest scale possible, and if we continue at this rate, things will definitely get worse and I had warned against this a year ago when I was asked while visiting the patriarch why I wouldn’t resign, and I said because political impasse would prevail and we’d be in caretaker mode for a long time, and that constitutes a crime against the country,” he added.

Diab said the Beirut Port explosion happened and the scenario that he had warned against, “Well, we are living it now. “

He insisted that the only way for Lebanon to gradually exit from this mess was by forming a new government that had the power to resume negotiations with the IMF, take decisions and implement reforms that his Cabinet had drafted a plan for last year (the economic and financial reforms plan), and which garnered praise from the IMF, the World Bank and the international community.

“Without a government that can implement reforms, the future looks bleak. It is unacceptable to be in a political deadlock at a time when Lebanon is going through social, economic and financial crises,” Diab finally cautioned.