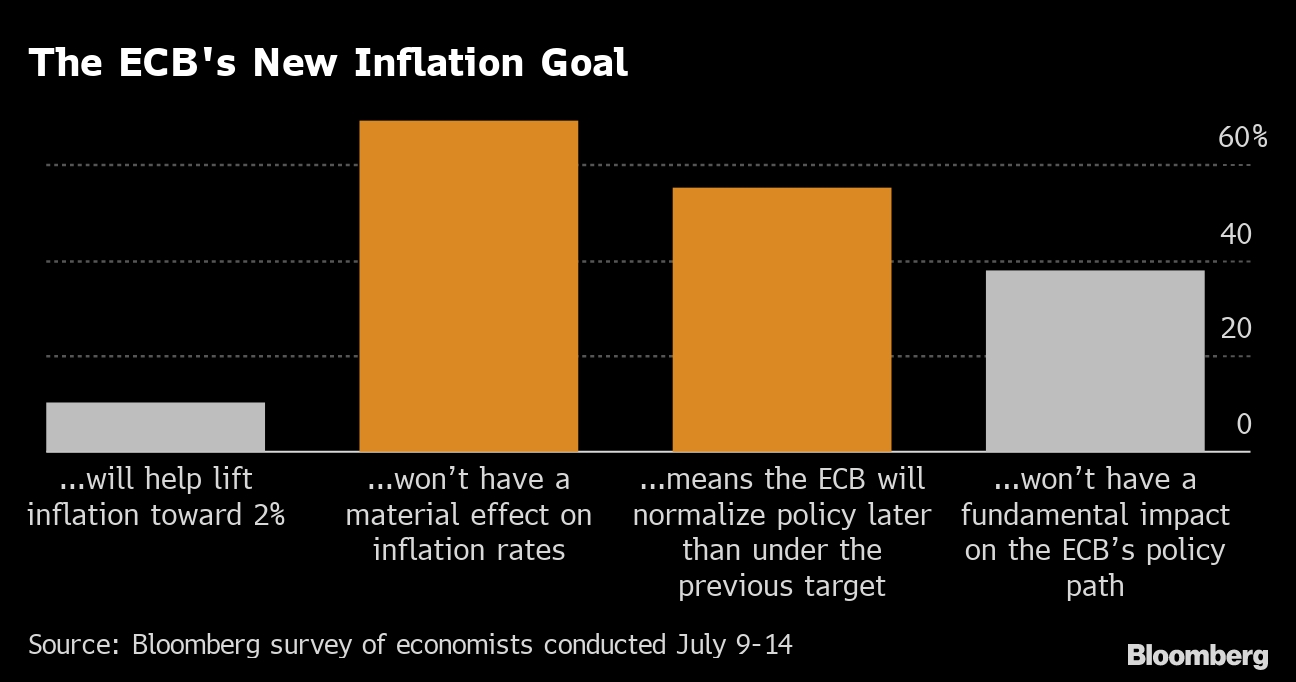 The European Central Bank is likely to limit changes to its monetary policy to words at next week’s meeting, leaving decisions on future bond-buying until the economic outlook clears, according to a Bloomberg survey of economists.

Policy makers will have to adapt their language on interest rates, asset purchases and other tools to a new inflation strategy that allows prices to grow moderately faster than 2% — the goal going forward — for some time. Economists including ING’s Carsten Brzeski and Rabobank’s Bas van Geffen expect a signal that substantial monetary stimulus may remain in place for longer.

The implementation of the ECB’s new strategy “should confirm that an exit from unconventional policies is still very distant,” said Kristian Toedtmann, an economist at DekaBank.

Some 52% of respondents predict the ECB will spend the entirety of its 1.85 trillion-euro ($2.2 trillion) pandemic program, up from 40% in June. Economists see monthly purchases falling by 5 billion euros to 75 billion euros in August, when there’s less liquidity on financial markets, before buying will slow more significantly in October.

The program is still expected to expire in March — as planned — with economists saying the ECB will communicate its official end three months in advance.

The survey also shows that officials will increase bond-buying under an older, less flexible program in April — to 30 billion euros a month from 20 billion euros currently — to smooth out the transition to post-crisis policy.

“We still expect that the Pandemic Emergency Purchase Program will expire in March 2022,” said Ulrike Kastens, an economist at DWS Investment GmbH. For a transitory period, the older program might have to be stepped up “in order to avoid market gyrations and to support the economic recovery.”

ECB Governing Council member Ignazio Visco said Thursday on Bloomberg TV that he doesn’t see monetary policy being tightened “for a long period” given the substantial slack in the euro-area economy and risks related to another wave of coronavirus infections.

New virus variants that could lead to another round of lockdown measures were seen as the biggest risk to the euro-area economy in the survey, followed by supply-chain disruptions that are plaguing many companies as well as inflation pressures.

“The Governing Council will commit in its forward guidance to keeping interest rates unchanged until inflation is forecast to reach or slightly surpass 2%, and remain there for some time within the central bank’s projection period of two to three years.”

Under the ECB’s new strategy, presented inflation can climb moderately above 2% for a transitory period if the economy is at the lower bound — to ensure expectations aren’t becoming entrenched too far below target. Policy makers haven’t offered any definitions for those terms.

Economists say that leaves the ECB with sufficient flexibility and discretion to assess any overshoot on a case-by-case basis.

The majority interprets “moderate” as a deviation from the goal of around 0.5 percentage point, with a large part of respondents saying the ECB would also tolerate differences of as much as 1 percentage point. “Transitory” was widely seen meaning six to 12 months.

“The size of the tolerated deviation will change depending on the cause” and “the expected persistence,” said Luca Felice Mezzomo, an economist at Intesa Sanpaolo. “Assuming that the overshooting is supported by the underlying dynamics of prices and it is not short-term, I guess that 0.5% could the limit for a moderate deviation.”