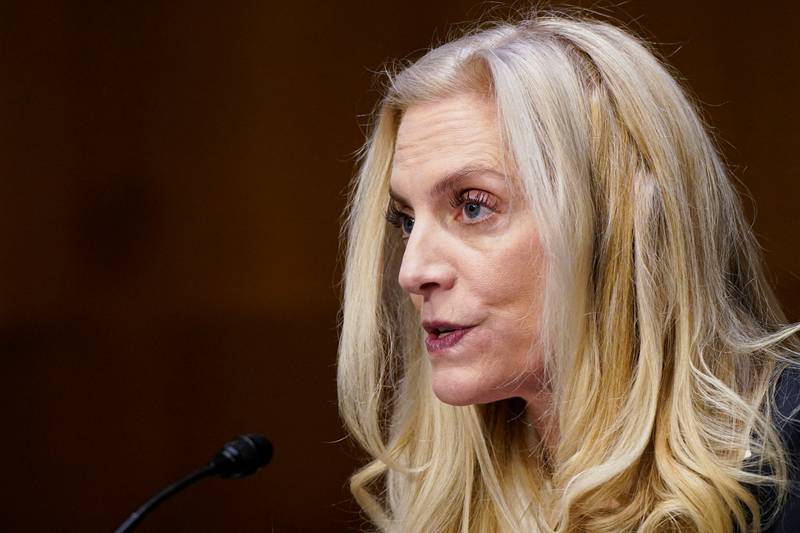 Federal Reserve Governor Lael Brainard, in a hearing for her nomination to become the US central bank’s vice chair, pledged on Thursday to help bring inflation under control.

Ms Brainard also deflected Republican senators’ concerns that she would use the position to sway national climate change policies.

In a hint that her nomination may be part of a larger partisan debate about the Fed’s direction, she was questioned by Republican Senator Pat Toomey on whether her support for more climate research and analysis at the central bank was “a precursor to direct capital away from” carbon-intensive industries.

“I have not suggested we do stress tests for climate,” Ms Brainard said. “We would not tell banks which sectors to lend to or not lend to.

“But we do want to make sure they are measuring, monitoring, their material risks.”

Her comments on climate were similar to those delivered by Fed Chair Jerome Powell at his own nomination hearing before the Senate banking committee on Tuesday.

But the questioning by Mr Toomey and other Republicans reflected deeper concern that appointments by the administration of US President Joe Biden may steer the Fed in a more aggressive direction that makes credit more expensive for legacy oil and gas companies or carbon resource exploration.

On monetary policy, Ms Brainard stuck to what is now a unanimous Fed consensus that interest rates will need to move higher this year, which she said could be done as soon as the Fed stopped a separate asset purchase programme in March.

Legislators from both parties are concerned about the fast pace of price increases, and some Fed officials have pointed to March as the possible time for “lift-off” from the near-zero policy interest rate in place since the start of the pandemic in March 2020.

In her opening remarks to the Senate panel, Ms Brainard said controlling inflation that has surged to a nearly 40-year high is the “most important task” facing the Fed, in comments echoing those of Mr Powell earlier in the week.

But unlike the session with Mr Powell, which included statements of support from both sides of politics, no Republican senators pledged to vote for Ms Brainard, a Democrat who was first appointed to the Fed in 2014 by president Barack Obama.

To become vice chair she would need confirmation by a majority of the Senate.

While Democrats hold narrow control of the chamber, some of Mr Biden’s top priorities have been stalled by Democratic opposition, perhaps most notably from Senator Joe Manchin of West Virginia, a coal-producing state where climate change policies are also controversial.

Ms Brainard could remain a Fed governor regardless of whether she becomes vice chair.

As a governor, she has been a frequent dissenting vote against steps taken during former president Donald Trump’s administration and under Mr Powell to loosen oversight of the largest banks.

Ms Brainard also called for the Fed to require financial companies to set aside more capital, and worried that Fed officials were behind European central bankers in understanding how climate change might affect the macroeconomy and financial system.