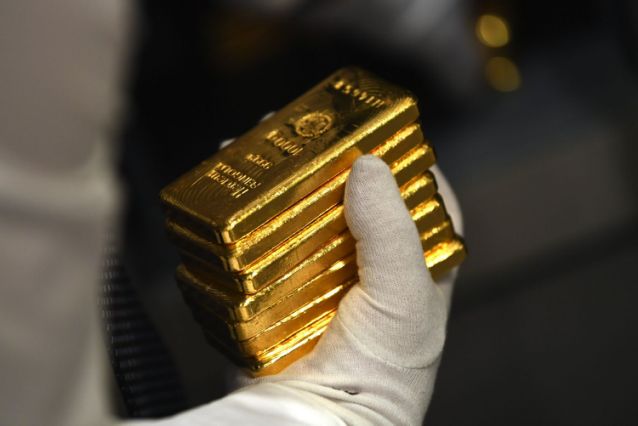 Goldman Sachs Group Inc. put a spotlight on the suddenly growing concern over inflation in the U.S. by issuing a bold warning Tuesday that the dollar is in danger of losing its status as the world’s reserve currency.

With Congress closing in on another round of fiscal stimulus to shore up the pandemic-ravaged economy, and the Federal Reserve having already swelled its balance sheet by about $2.8 trillion this year, Goldman strategists cautioned that U.S. policy is triggering currency “debasement fears” that could end the dollar’s reign as the dominant force in global foreign-exchange markets.

While that view is clearly still a minority one in most financial circles — and the Goldman analysts don’t say they believe it will necessarily happen — it captures a nervous vibe that has infiltrated the market this month: Investors worried that this money-printing will trigger inflation in years ahead have been bailing out of the dollar and piling furiously into gold.

“Gold is the currency of last resort, particularly in an environment like the current one where governments are debasing their fiat currencies and pushing real interest rates to all-time lows,” wrote Goldman strategists including Jeffrey Currie. There are now, they said, “real concerns around the longevity of the U.S. dollar as a reserve currency.”

The Goldman report makes clear that Wall Street’s initial reluctance to sound the alarm on inflation back when the pandemic began is fading. Having been burned badly by ominous forecasts of runaway price gains following the fiscal and monetary stimulus that followed the 2008 financial crisis, many analysts have been hesitant to repeat such calls now, especially as the economy sinks into a deep recession.

But with gold surging to record highs and bond investors’ inflation expectations climbing almost daily, albeit from very low levels, the debate on the long-term effects of stimulus has gotten louder.

The 10-year breakeven rate, the gap between nominal and inflation-linked debt yields, has risen to about 1.51%, up from as low as 0.47% in March. That’s seen real yields, which strip out the impact of inflation, plunge further below zero — to about -0.93% on similar-maturity bonds.

Adding to the upward pressure on inflation expectations are forecasts that the Fed will soon link guidance on the policy rate to prices. That would provide at least some temporary space for inflation to run above the central bank’s 2% target.

“The resulting expanded balance sheets and vast money creation spurs debasement fears,” the analysts at Goldman wrote. This creates “a greater likelihood that at some time in the future, after economic activity has normalized there will be incentives for central banks and governments to allow inflation to drift higher to reduce the accumulated debt burden,” they said.

Of course, people have been wrong-footed in calling for the dollar’s demise for years — including when the Fed was aggressively easing in the wake of the 2008 crisis.

The ICE U.S. Dollar Index hasn’t had more than three consecutive years of annual declines since the early 1970s. That’s in part because there are few viable alternatives to dollar assets such as Treasuries, the world’s biggest bond market with nearly $20 trillion outstanding.

The dollar is used in 88% of all currency trades, according to the latest triennial Bank for International Settlements survey. And it still accounts for about 62% of the world’s foreign-exchange reserves, although that’s down from a peak of more than 85% in the 1970s, IMF data show.

The U.S. “isn’t anywhere close to losing its reserve currency status given the depth of capital markets and overwhelming volume of U.S. dollar-denominated global transactions,” said Michael Krupkin, head of G-10 FX spot trading for the Americas, at Barclays Plc.

For Goldman, the growing level of debt in the U.S. — which now exceeds 80% of the nation’s gross domestic product — and elsewhere, boosts the risk that central banks and governments may allow inflation to accelerate.

Investors are poised to hear more about the Fed’s view on inflation with its latest policy decision Wednesday.

“Until we get through the Fed, the dollar could strengthen as investors lock in profits,” Edward Moya, a senior market analyst at Oanda Corp. said in a note.