Nehme: Cabinet to mull haircut of Eurobonds held by banks 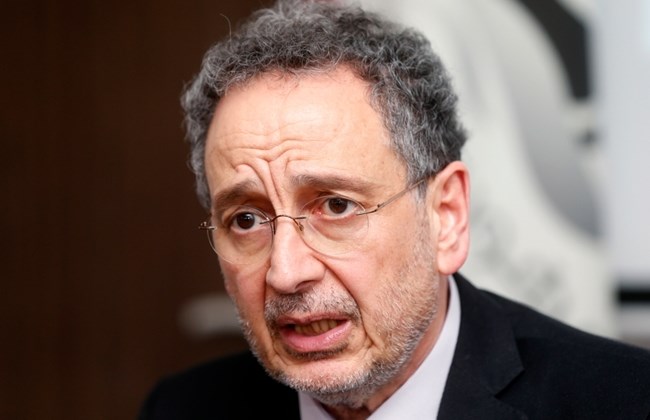 Nehme: Cabinet to mull haircut of Eurobonds held by banks

The government is mulling the possibility of applying a haircut on part of the sovereign Eurobonds held by Lebanese commercial banks as part of efforts to restructure the public debt, Economy and Trade Minister Raoul Nehme said Wednesday.

He also hinted that unpegging the lira from the dollar may be an option in the long run.

“In these cases we have three solutions: Write off part of the debt, increase the tenure [time of maturity], increase the interest and/or a combination of all those. I think we cannot avoid a haircut on the Eurobonds,” Nehme told The Daily Star in an interview over the telephone.

The government of Prime Minister Hassan Diab announced on March 8 that Lebanon had defaulted on the payment of the $1.2 billion Eurobonds which matured on March 9 of this year.

This is the first time Lebanon has defaulted in the payment of its debt.

Lebanese banks hold around $14.5 billion of the sovereign Eurobonds, the Central Bank holds $5.5 billion while the rest are held by foreign investment funds.

The minister explained that applying a haircut on the Eurobonds depends on the negotiations with the bond holders.

“This all depends on the negotiations and the capacity and how much money per year needed to go back to zero percent deficits. Based on that we can say what we are going to do about the debt. Any other assumption is premature,” Nehme said.

He added that the government would also look at the ability of each bank to accept a haircut on the Eurobonds they are holding in ttheir portfolios.

Lebanon’s public debt is close to $91 billion, or 170 percent of the country’s GDP.

“We don’t want to commit to something and be able to do it,” Nehme said.

He brushed off the possibility of any haircut on customer deposits.

“I am 100 percent against haircut of bank deposits. You don’t go to a depositor and tell him give me your money. “We won’t do a haircut on deposits. What we may do is some kind of a bail-in and this means give to the depositors shares in the banks and this is a recapitalization of the banks,” Nehme said.

The minister underlined the importance of bank consolidation and recapitalization of the lenders once the consolidation is applied in Lebanon.

“Bank consolidation is important for growth of the economy because the economy cannot grow without the banks. But banks need to provide loans to the private sector instead of the government,” he added.

Nehme did not say how many banks Lebanon actually needs although he acknowledged that the country has too many banks.

“Bank need to change their business model and not only give loans to the government,” he added.

Nehme repeated again that the scenario of a haircut on the Eurobonds lies mainly on the progress of talks with the bond holders.

The minister revealed that the actual talks with the bond holders haved not started yet.

The government has assigned consultant and law firms to examine the prospects of restructuring the public debt.

Nehme indicated that the foreign vulture firms holding part of the Eurobonds may not be in a rush now to take Lebanon to court if talks fail with the government due to the magnitude of the problems these firms are facing worldwide as a result of the coronavirus.

He added that the government definitely needs massive cash assistance to stimulate the economy and cut the budget deficit.

“We are holding talks with the International Monetary Fund. But we will not necessarily only ask the IMF for help. We are going to approach friendly countries and other agencies to provide Lebanon with financial assistance,” Nehme said.

He also stressed that no financial assistance will come to Lebanon if it is not matched with reforms and restructuring of the public debt.

Nehme also commented on the capital control law which will be discussed by the Cabinet Thursday.

“The capital control item is to ensure that fresh money is safe and to me this is the most important one. Banks have been transferring money abroad at the request of depositors for medical and education purposes, for example,” he added.

Asked about the prospects of unpegging the dollar, Nehme said the key question what the peg the government was working on was,

“Should we keep the peg or should we float it? Any kind of measure we take now will be a temporary measure. On the long term, everything is on the table including unpegging,” he said.

Nehme said that Lebanon is in real need of cash injection and the coronavirus and the lockdown have made the situation more pressing for the government.

“Our financial situation is very critical even without the coronavirus and our priority to the people is parabolic as opposed to exponential. This is what all our efforts are focused on. In parallel, we are working with the World Bank on how to help those in extreme poverty in Lebanon before the coronavirus outbreak,” he added.

Nehme stressed that the government will try to do its best to alleviate the suffering of the Lebanese, and especially the poor people despite the limited resources the authorities have.

“We will see what we can do with very little means we have and we will also look what we can do for the companies like giving them more time to pay taxes,” he said.

Nehme agreed that Lebanon’s GDP declined after the crisis but did not have accurate or official figures about the actual size of the economy now.