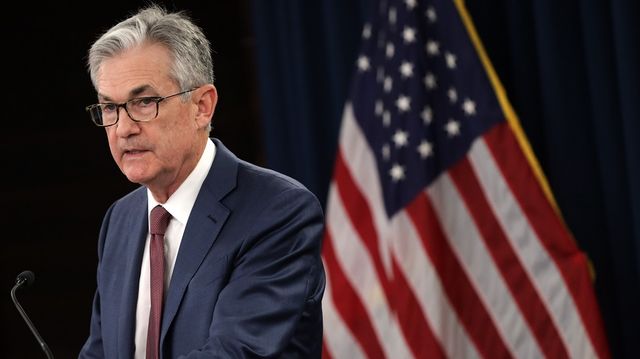 Jerome Powell has a goal that is bigger than the bond market’s near term inflation concern.

In perhaps his most forthright press conference since taking the helm of the central bank three years ago, the Federal Reserve chair this week laid out three critical messages for investors who have been propelling bond yields higher on the bet inflation would eventually force his Fed to tighten monetary policy faster than it’s been indicating.

Powell’s messages? He’s not unduly concerned by rising yields, control of monetary policy communications resides with him and he’s willing to run the economy hot to help it recover from fallout of Covid-19.

Asked directly during his Wednesday press conference if he was concerned about the increase in Treasury yields, Powell referred to financial conditions and said they remain “highly accommodative.”

It was a clear signal that he wasn’t going to bother with the emotional swings over inflation risk that’s obsessing investors. Powell has an explicit strategy to reflate the economy and he doesn’t think this is going to be easy after decades of low inflation.

Therefore, he wants to see actual data and he isn’t persuaded that inflation inertia — where today’s price changes look a lot like yesterday’s — is about to change.

“The fundamental change in our framework is that we’re not going to act pre-emptively based on forecasts for the most part and we’re going to wait to see actual data,” Powell said. “I think it will take people time to adjust to that and to adjust to that new practice, and the only way we can really build the credibility of that is by doing it.”

Tantrums will get his attention, though.

“I would be concerned by disorderly conditions in markets or by a persistent tightening of financial conditions that threaten the achievement of our goals,” he added.

“The SEP is not a committee forecast. It’s not something we sit around and debate and discuss and approve,” he said, noting that the dot plot of interest-rate forecasts submitted by each of the Fed’s 18 policy makers was “not meant to actually be a promise or even a prediction of when the committee will act.”

The forecasts display a policy response, if other assumptions made by individual officials turn out as expected.

But forecasting a rate increase three years out, as seven Fed officials did, “is highly uncertain,” Powell dryly noted, adding that no one had much experience of predicting how the economy will recovery after a pandemic.

All of these comments intentionally devalued the policy signal of the dots. They also raised a question: If guidance on the timing of eventual tightening doesn’t reside in the dot plot, where does it?

Powell made clear that resides with him.

In the choreography of tightening, the first step will be tapering the $120 billion of monthly asset purchases which the Federal Open Market Committee has pegged to “substantial further progress” on employment and inflation.

Powell said that will be a judgment, or in other words, a committee consensus that Powell himself is in charge of forming. “Until we give you a signal, you can assume we are not there yet,” he said.

Taking command of the message bestows an Alan Greenspan-like, indispensable quality on Powell at a time when Fed communication is critical for financial markets, and as debate builds on whether he’ll get a second term when his current stint as chair ends in February.

President Joe Biden has yet to indicate if he’s open to keeping him on or picking someone else.

“Powell would like to be reappointed and Democrats have kept the door open,” said Derek Tang, an economist at LH Meyer/Monetary Policy Analytics in Washington. “If Democrats were trying to coax a favorable policy out of Powell, they have kept him in play but not made him a sure thing. It is a very sophisticated job negotiation.”

A third message came in the forecasts and how they will respond to unemployment. Taken together, the median of the combined outlooks showed inflation pushing a bit above 2% this year but falling closer to the target in 2022 and 2023.

Economic growth roars ahead in 2021 thanks in part to fiscal policy, surging 6.5% and staying above the committee’s equilibrium growth rate of 1.8% for the next two years. Unemployment falls to 3.5% by the end of 2023, matching the pre-pandemic low.

For all that heat, a majority of officials still don’t see much of a need to raise interest rates.

The story here is that their “broad and inclusive goal” of maximum employment isn’t at all represented by the unemployment rate. Even at 3.5%, they figure there will be slack to exploit, perhaps especially in the most hard-hit segments of the job market such as working-age women and minorities.

Powell has been closely focused on the uneven blow delivered by pandemic, and he wants to get the 9.5 million Americans who’ve lost jobs during the Covid-19 era back to work as quickly as possible.

Even though the unemployment rate dipped last month to 6.2%, it rose to a staggering 9.9% for Black Americans despite the economy supposedly being in robust recovery.

Powell argues that because inflation expectations are anchored at 2%, the Fed can run the economy hot to deliver a more inclusive recovery without suffering a sustained increase in prices.

“Unemployment will take quite a time to go down,” Powell said, and here it is safe to say he is thinking about the broader measures of joblessness. “The faster the better. We’d love to see it come sooner rather than later. We’d welcome nothing more than that. But realistically, given the numbers, it’s going to take some time.”