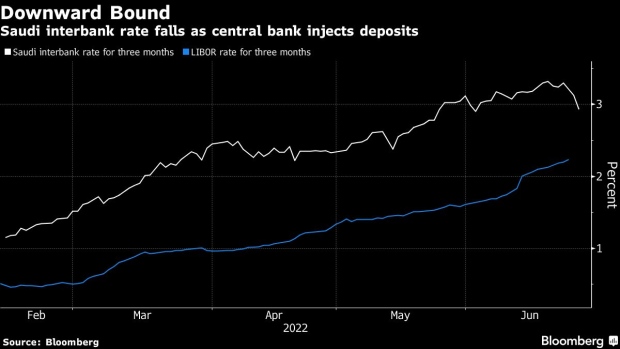 Saudi Arabia’s cash injections into banks brought immediate liquidity relief for an industry still in the grip of a funding challenge.

The interest rate banks charge one another for loans had its biggest two-decline since the height of the global pandemic in March 2020 after policy makers acted to address the worst funding crunch in over a decade. The Saudi Central Bank, known as SAMA, in recent days placed about $13 billion as time deposits with commercial lenders, according to people familiar with the matter.

But under the assumption that Saudi banks will expand credit by nearly 14% this year while deposits grow far slower, Bloomberg Intelligence estimates lenders will still need to raise about 160 billion riyals ($43 billion) to finance bigger loan books.

The first signs of a turnaround have already emerged, however, with liquidity conditions loosening sharply since Friday’s close. The three-month Saudi Interbank Offered Rate, or Saibor, slipped to 2.9281% on Monday, a decline of nearly 37 basis points in two days.

Banks included in Saudi Arabia’s benchmark Tadawul index climbed as much as 1.4% on Monday before losing gains and closing down 0.3% — still faring better than the country’s broader equities gauge.

The extent of the funding stress among Saudi banks has little precedent outside periods when oil prices were crashing or global crises like the credit crunch of 2008-2009, when the price of crude collapsed below $40 a barrel. This year, by contrast, Saudi Arabia is on track to run its first budget surplus in about a decade after seeing revenues soar on the back of a rally in oil prices above $100 and rising production.

Saudi Arabia’s finance minister said last month that the government would hold excess oil revenues in its current account until at least early next year, as it looks to break an oil-linked boom-bust cycle that has typified the economy in the past.