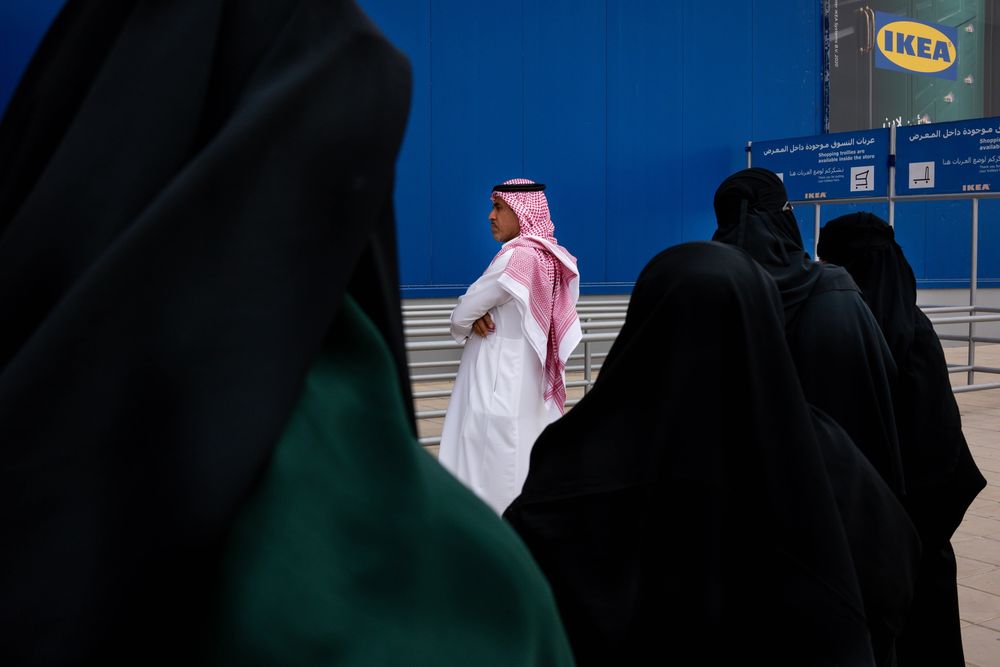 It was a sharp descent for Rakan Al-Ghalayini.

A graduate of Northeastern University in Boston who moved back home to Saudi Arabia, he just found work at the start of 2020 in the kingdom’s new entertainment industry, booming at the time under plans to reinvent the oil-based economy.

But in March, as the pandemic struck and the oil market went into meltdown, the crisis obliterated his job of bringing in hundreds of guests for Saudi Arabia’s first international film festival. The event was indefinitely postponed, along with all the others he’d hoped to work on — leaving him unemployed, again.

“My future looked bright after a year of not working,” said Al-Ghalayini, 26. “What do I do now? Back to square one?”

It’s only over the past month that the full extent of the damage sank in for Saudi businesses. Hit simultaneously by plunging crude prices and coronavirus shutdowns, the non-oil economy is expected to contract for the first time in over 30 years.

Many of the kingdom’s new-found strengths suddenly became vulnerabilities, threatening a transformation that was just taking root.

As the pandemic sends the Saudi economy into a downward spiral, people across the kingdom are adjusting to a harsh new reality.

Naif, a 25-year-old who runs an events company, had been upbeat last month in anticipation of a turnaround. The downturn had forced him to pause expansion plans, but he’d been able to keep paying employees with the help of an interest-free bank loan of 750,000 riyals ($200,000) — part of the government’s stimulus package. Now he’s dreading laying them off.

While the pandemic drags on and consumers come under pressure, Naif fears firms like his will collapse and he won’t be able to pay back the loan. He asked to withhold his last name so he could speak freely about his financial situation.

“I guess things are much, much worse now,” he said. “I don’t think we’ll be back in business for a year at least.”

Construction takes place in the King Abdullah Financial District on May 19 in Riyadh.

But as the crisis grew worse, the world’s largest crude exporter made a sharp turn toward austerity in May, a move that will likely pinch consumption long after this year’s shocks dissipate. Earlier data from PwC showed outlooks were already worsening at firms across the kingdom.

In a survey of chief financial officers in mid-April, 77% of respondents in Saudi Arabia said the pandemic was causing them “great concern” — up from 55% two weeks earlier. Half said they expected to make lay-offs over the next month.

“We’ve made so much progress that at this point it’s kind of tough to see it go another way,” said Fawzi Mudawwar, who co-founded a free consulting service called Kalbonyani to help businesses adapt to the pandemic.

This year was meant to be a turning point for the conservative Islamic kingdom: a key milestone for Prince Mohammed bin Salman’s plan to overhaul the economy and loosen social restrictions.

Only weeks ago, consumer spending was soaring as businesses finally started to recover from the impact of the last oil price rout, in 2014. Riyadh was abuzz with pop-up restaurants frequented by flirting couples in scenes that would once have been unthinkable.

Now, the streets fall silent each evening after a 5 p.m. curfew imposed to slow the spread of the virus. Cafes and even mosques are shut as cases spike in crowded labor camps, while security guards stand watch with thermometers at the entrance of malls.

The sectors key to the prince’s plan — from entertainment and tourism to sports — are among the hardest hit.

More worryingly for many businesses, officials have turned to drastic measures to steady public finances as oil revenue falls. They’ve trimmed state workers’ allowances and tripled a value-added tax to 15%, shocking many citizens. The crown prince’s program to diversity the economy, known as Vision 2030, itself is facing spending cuts as money gets redirected to public health and aid for businesses.

“These are the priorities: the health care of people and the livelihood of people,” Finance Minister Mohammed Al-Jadaan told Bloomberg.

The Saudi Arabia that will emerge from the crisis is likely to have lower average incomes, with a younger generation that won’t match its parents’ standard of living, according to Karen Young, a Gulf-focused scholar at the American Enterprise Institute in Washington.

At the same time, the upheaval could ultimately aid the process of replacing the foreign workers who dominate the private sector with Saudis, said Young. It’s a trend already visible over the past few years.

At Coyard, an independent coffee shop in Riyadh, almost all of the workers are Saudi — a point of pride for 29-year-old Ghanem Binyousef, who opened the cafe in 2018.

His business is facing a steep decline in revenue. But it’s adapted so far, delivering coffee beans to customers at home and trimming salaries while avoiding layoffs.

“We are trying to hang on,” Binyousef said, noting that they benefited from a government program that covers 60% of wages for some Saudis in the private sector.

Local chain Maestro Pizza has changed its operating hours and their menu to try to adapt to the crisis.

Even so, he’s less certain than he was a few weeks ago.

“Although things are getting better day by day, we have less visibility than we thought we had a month ago,” Al Omran said. “We don’t know when this will end.”

As for Al-Ghalayini, who lost his job, he’s thinking about going back to tutoring children, which helped him get by during his last job search.

“That’s why it’s sad, because we had just built ourselves up again,” he said. “But I’m sure that we will get back on our feet.”