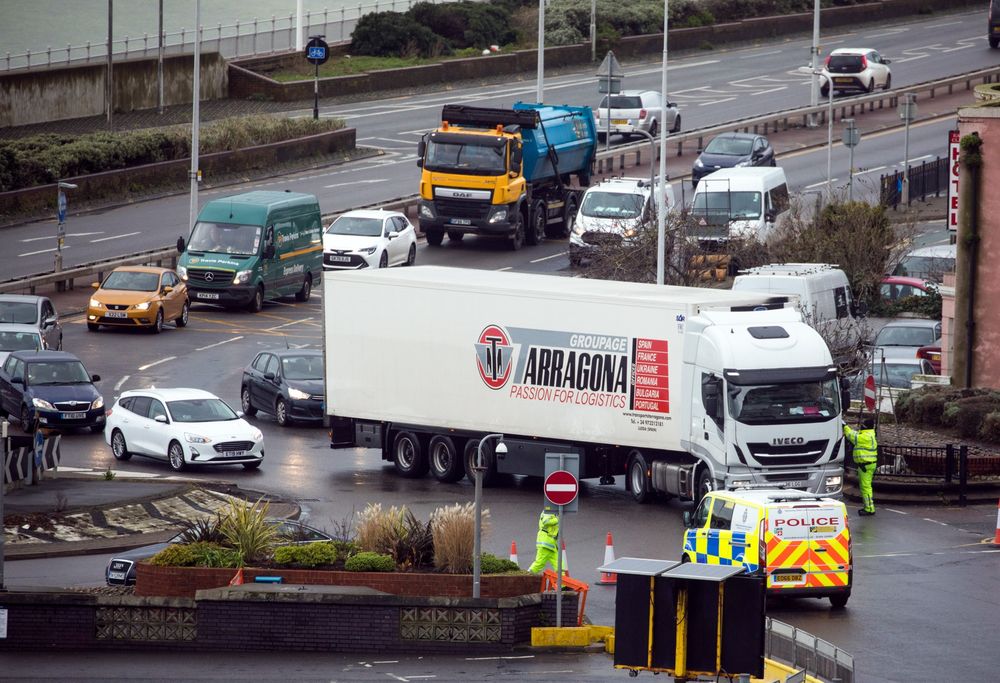 While the mile-long lines of trucks have dissipated at ports, U.K. businesses are waking up to less visible forms of friction at the border with the European Union that may cause more enduring damage.

From health certificates to new taxes and additional paperwork, the cost of moving goods across the English Channel is rising due to Britain’s exit from the EU. Just 6% of firms told the Bank of England they were fully prepared for what was to come, and the headaches are just starting less than two weeks into the new system.

While each one of the new rules marks a minor shift from the border-free trade Britain enjoyed for four decades as a member of the EU, together they add up to a significant constraint. That’s already starting to upend supply lines and limit shipments for companies of all size. Those hit hardest are the U.K.’s 5.9 million small- and medium-sized businesses, which employ about three-in-five of those working in the private sector.

“There’s so much complexity,” said Adam Marshall, director general of the British Chambers of Commerce. “It’s like an onion — the more you peel, the more you cry.”

Small and medium businesses account for 61% of U.K. employment

Here’s some of the biggest irritations hitting businesses because the U.K. is no longer a member of EU’s single market and customs union:

British firms post Brexit must show where their goods were made — and where the components in those products come from — to determine whether they must pay value-added tax when resold into the EU. The answer determines whether they qualify for tariff-free treatment. Those regulations don’t exist for trade within the EU, making the old system far simpler.

Confusion about the rules has already prompted complaints from big-name retailers such as Marks & Spencer Group Plc. Others have suspended sales to the EU. Debenhams temporarily switched off its Irish e-commerce site, while John Lewis Partnership Plc, Asos Plc, and Fortnum & Mason stopped deliveries to Ireland.

“Businesses have been completely blindsided by the ‘rule of origin’ part of the deal, which leaves them at a major competitive disadvantage when selling in the EU,” said Michelle Dale, senior manager at accountancy group UHY Hacker Young. “Unfortunately, not enough was done to prepare them.”

British exporters must register to pay VAT in EU nations. That is prompting a number of companies to halt their cross-border trade, said Stuart Lisle, chair of the Brexit taskforce at professional services firm BDO LLP.

“If we want to keep selling to customers from any EU state from our stocks in the U.K., we must VAT-register in each target country immediately,” said Jennie Potts, co-founder of Mama Bamboo, which sells eco-friendly disposable nappies and wet wipes. “If we don’t, we will trigger immediate liabilities. It’s so irritating. We have to ask is it worth all the time and effort.”

Lisle said many of his clients have not had to face those issues before and that the added costs and complexities “can be very expensive to administer.”

VAT generates around a fifth of U.K. government revenue in a normal year

For Andrew Skea, director of Potato House in Dundee, Scotland, that effectively means that the EU just isn’t accepting his seed potatoes. The product has been grown in Scotland for over 100 years, and half of Skea’s sales are in the EU.

“Until now the EU has been a domestic market for us,” he said. “Now we’ll need phyto-sanitary certificates, and the paperwork’s going to have to accompany every order.”

In an effort to simplify the forms they must file, some shippers are now refusing to carry loads containing a mix of different products from different companies, according to trade body Scotland Food and Drink. That disproportionately hurts firms shipping in smaller quantities. Another issue is that the terms of the deal were announced only days before the deadline for compliance.

“If you’re only issuing guidance hours before the end of the transition period and businesses are busy dealing with the pandemic, things will start to fall apart — and they are starting to fall apart,” said James Withers, chief executive officer of the trade group. It’s asking the government to request a grace period on enforcement by the EU until July.

The cost of shipping goods across the border is rising with delays at ports and some trucking firms reluctant to deal with the hassle.

“Things keep getting stuck,” said Oliver Conger, managing director of Rototherm Group, a maker of sensors and now personal protective equipment. “I’m now having to buy up what stock there is in the U.K. at three times the price.”

Tough new Covid-19 lockdowns that shut non-essential businesses aren’t helping. Four in 10 companies said their cash flow deteriorated in the fourth quarter, with the very smallest hit even harder, according to a survey by the British Chambers of Commerce.

“Thousands of small firms need to invest in tech, advice and operational adjustments in order to keep trading across the EU but don’t have the cash needed to do so,” said James Sibley, who follows international affairs at the Federation of Small Business.

Products sold in the EU require a CE mark showing they meet health, safety and environmental standards. The U.K. will develop its own certification, meaning companies selling in both regions need to register for both standards.

“It’s such a ridiculous level of duplication,” Renee Watson, founder of The Curiosity Box, a subscription service that teaches kids about science. With annual sales of 500,000 pounds ($673,000), the company will have to spend 20,000 pounds on new safety marks to sell in the Netherlands, France and Germany.

Watson identified 26 areas of her business that would be affected by Brexit. “I’ve struggled to allocate that much time.”