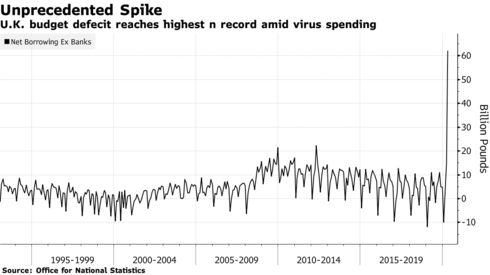 Britain posted a record budget deficit in April as the government unleashed an unprecedented package to prevent the collapse of the virus-stricken economy.

The budget deficit stood at 62.1 billion pounds ($76 billion) last month, the Office for National Statistics said Friday. The figure is equal to the total borrowing in the whole of the previous fiscal year.

The monthly deficit is the most since modern records began in 1993, and over 50 billion pounds more than April 2019. Even during the financial crisis, monthly borrowing was never more than 22 billion pounds.

Central government spending surged 57% and revenue plunged 27%. Net debt including Bank of England programs jumped to almost 98% of GDP, the highest level since 1963.

The figures reflect the cost of interventions announced by ChancellorRishi Sunak, including paying the wages of 8 million furloughed workers, a surge in welfare claims and the hit to tax revenue from a shrinking economy.

With net debt predicted to exceed 110% of GDP by September, a debate is raging over how Britain should pay the bill. Borrowing costs are at record low and pressure is mounting on the government not to return to the era of austerity and instead reduce the burden by letting growth rip.

Despite some easing of the lockdown measures in place since March 23, shops remain shuttered and businesses closed, putting the country on course for its deepest recession since the early 1700s.

The Office for Budget Responsibility, which prior to the crisis predicted borrowing of 55 billion pounds in the current fiscal year, now expects a shortfall of over 300 billion pounds, or 15% of gross domestic product.

The deficit in the whole of the 2019-20 fiscal year, which ended last month, was revised up to 62.6 billion pounds.

The most expensive of the government support measures is the Job Retention Scheme, which cost 14 billion pounds in April and led to an upward revision for March, the ONS said. The central government net cash requirement, the basis for bond issuance, totaled 63.5 billion pounds last month.